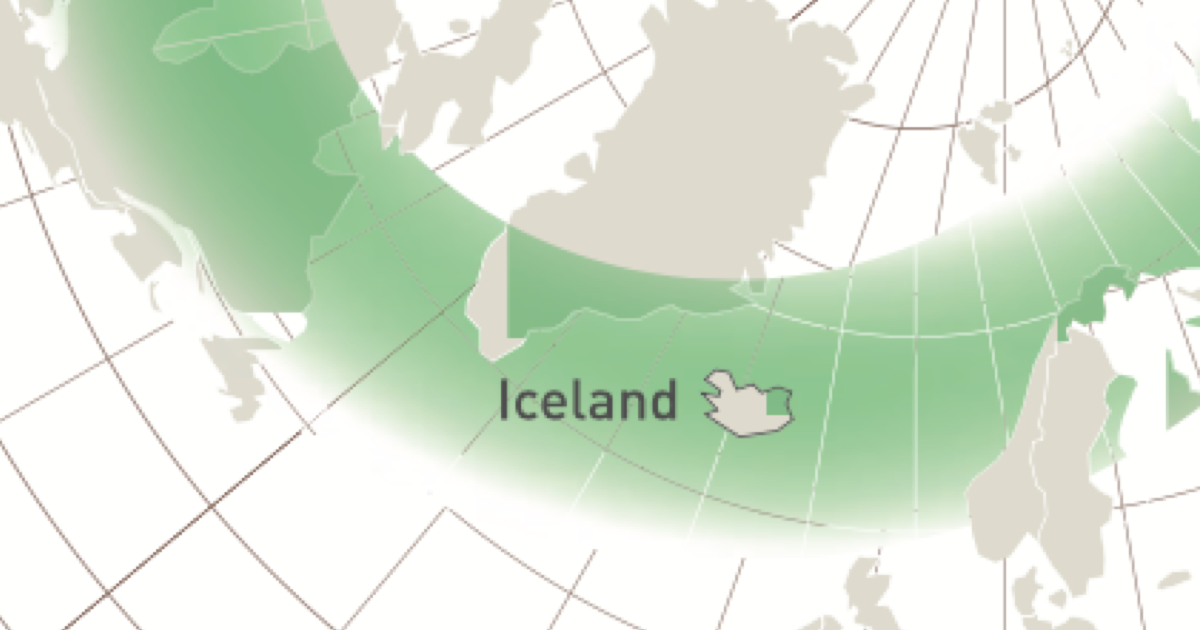 What are the northern lights?

The auroras are made up of a series of electrically discharged particles from the sun that enter earth's magnetic shield and create a light when mixed with gasses (such as nitrogen and oxygen) in our atmosphere. The particles come a long way through space before being drawn into earth’s polar regions, although it only takes a couple of days to travel the full 150 million kilometres!

Where can you see them?

They occur most frequently in a belt of a 2.500 kilometre radius centered on the magnetic north pole. This so-called auroral zone extends over Iceland, northern Scandinavia (Finland, Sweden, Norway), the southern tip of Greenland, north America and along the northern coast of Siberia.

When can you see them?

While the lights are present throughout the year, the summer doesn’t provide dark enough conditions for them to be viewed with the naked eye. They are best displayed under dark clear skies, which for Iceland, is between September and April from about 20:00 and onwards.

What are the chances of seeing them?

The chances are fairly good during the winter months if you are visiting locations that are about 65° or higher in latitude. Generally, the further north you travel, the more likely you are to see them. Conditions such as solar activity, clear skies and minimal light pollution also play a big role in spotting them.

Can you only see them in the northern hemisphere?

Why do they change shape?

It depends on the solar winds of the sun in the days prior what shapes and activity you can expect. The lights will display dynamically in the sky during periods of strong flares, but static when there is minimal activity. They can appear to be racing, dancing, twirling and swirling among the stars during the most intense displays!

Why do they change colours?

The lights can appear in many different colours although green is the most common. It depends on the types of gasses the particles collide with which colour you will see. Collisions with oxygen will result in an array of greens and yellows, whereas nitrogen will produce pinks and purples.

How long do they last?

It is impossible to predict how long each sighting will last. Most often they will last for a few minutes at a time before slowly fading away and then suddenly coming back. At other times they may last for only a few seconds or even for 30 minutes, and sometimes even longer.

Is it possible to hear them?

The lights do not emit sound that can be heard by human ears. Attempts have been made to record audio from the electrical discharge of the northern lights, but these have not been successful so far.

Can everyone see them?

Yes, although your perception of them can depend on the health of the photoreceptors in your eyes. In low light levels, colours can often appear black and white to our eyes and we are not always able to pick up faint colours. This means that if the northern lights are weak, they can appear to some to be milky white and resemble clouds.

Why can the northern lights look different in a photo?

With cameras we can control the aperture and shutter speed of the lens in such a way that we are able to let in more light and capture more intense colours, which our eyes cannot always perceive in the dark. That is why sometimes the pictures will appear to be more vivid than your real time experience.

Are they dangerous to humans or wildlife?

The auroras form in the upper atmosphere, far away from any life, where they don’t pose any threat. Animals are on the other hand known to sense things that humans cannot and dogs have been reported barking at an aurora lit sky. This suggests that perhaps they can sense the natural disturbance caused by the northern lights.

Can the moon affect their visibility?

Yes, the moon can affect the visibility if the auroras are faint. It is best to seek them out close to a new moon, as a full moon can prove to be too bright to see the activity.

There is no way to guarantee sightings, since this is a natural occurrence. Aurora forecasts will often offer a variety of different forecasts including cloud cover, moon status, temperature, weather conditions and Kp index (measures levels of geomagnetic activity from 0-9). The Kp index is considered to be quite accurate, although no more reliable than a weather forecast.

How is it best to photograph them?

Try the following settings and adjust as needed. If the image is too bright / dark, try to play with the shutter speed or ISO. It is important that the camera is still for the duration of the photograph being taken.

Learn more about the northern lights in Iceland.