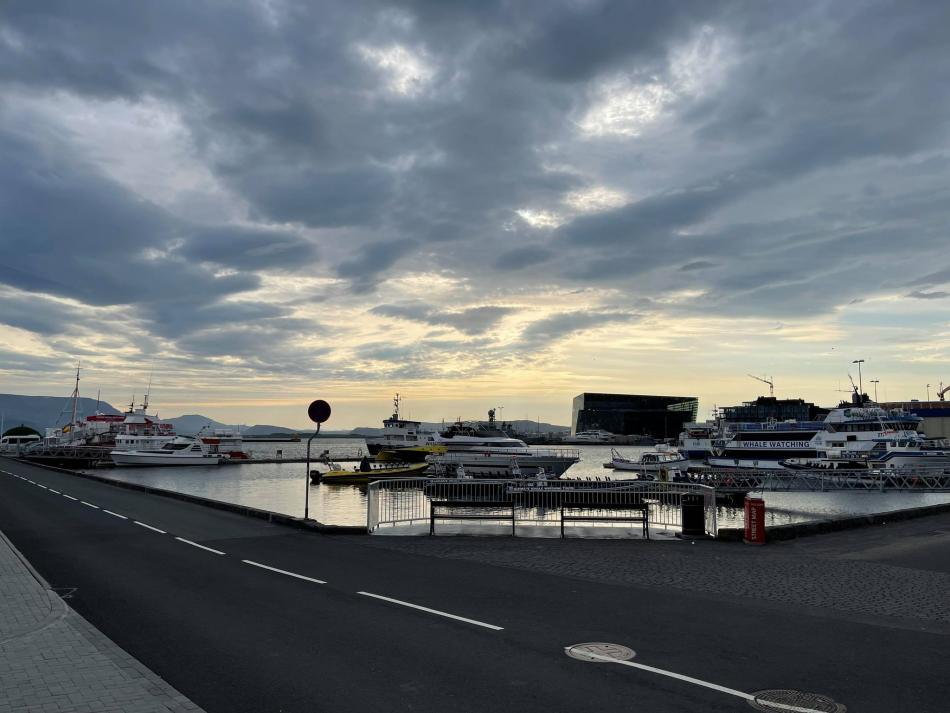 Report from Elding : A very covered sky today with a very nice and relaxed sea. There was very little wind that was coming from south east. c It was short sightings but nice to see those small cetaceans surfacing a few times.When we where about to turn back because we were very far away from Reykjavik we saw a minke whale. The animal was surfacing quite close a few times until we had to head back. During the way back we saw a very nice pod of at least 10 white beaked dolphins with many calves and juveniles. There were apparently in a great mood, the little ones were jumping in very funny ways for a while. The baby dolphins are often heart-warming. We were terribly late so we had to go back with nice memories and pictures.

Report from Elding: The sky was grey keeping us fresh and awake with occasional sun throughout the tour. We sailed out into the bay and kept going until our captain spotted a minke whale. 5 harbour porpoises could also be seen nearby but showed as usual a pretty elusive behavior. We were also delighted by a pod of 8-10 white-beaked dolphins. They were in a playful mood, jumping in many ways: belly flop, forward flip, backflip, helicopter, barrel roll, power drill, reverse dive among others. Some of them were even swimming under the boat! We had an amazing time with them. Another minke whale could be seen at the distance. When we approached we realized that the speed in which it surfaced was incredible high but also we get some nice slow surfaces allowing us to capture some memories. Incredible morning!

Report from Eldey : With a very similar weather than this morning we went out, this time heading south to see if there were more abundancy. Today the bay was a bit empty with almost no birds, only a few northern fulmars gliding close to our boat, and some northern gannets in the distance. We did not find anything in this area so we turned and came back more to the north. On the way we crossed 4-5 harbour porpoises that were one time very close of our boat. Communicating with other boat we heard that there was a humpback whale close to land near the whale fjord so we went there and so that it was Davy Jones once again. We saw the fluke a few times and the blow many times. The animal was swimming quite at a constant speed probably travelling a bit to find an area with fish. We stayed with it a while and when we saw a nice fluke dive we let it alone. We went back under a brief but enjoyable sun with fulmars following us.

Report from Þruma: The wind in the bay didn't quite match to the forecast as a fairly strong south east wind  stirred the ocean making for a bumpy ride in the direction of Reykjavik. Not much activity in the bay which was noticeable when one company radioed in the location a of a humpback whale. We happened to be very close and watched the whale for one surface sequence, but left due to the large volume of boats descended into the area. We wanted to abide by code of conduct and find our own wildlife so decided to circle some well known feeding grounds. After searching for 30 minutes or more, we were unable to find anything else, aside from the occasional harbour porpoise that hastily moved by as we made progress through the bay. After the searching time, many of the large boats had left the humpback and we were able to watch the individual alone.

Report from Eldey: This tour started with the encountering of 5 harbour porpoises which a few people were able to spot, spectacularly near of the boat. After that we had to search for a while until we spot 1 minke whale, which was surfacing very quickly and disappeared after surfacing 3 times. After that we sailed and sailed but didn't find any more whales, unfortunately. We gave everyone a complimentary ticket and wish that the lovely passengers that joined us this evening will come back soon.