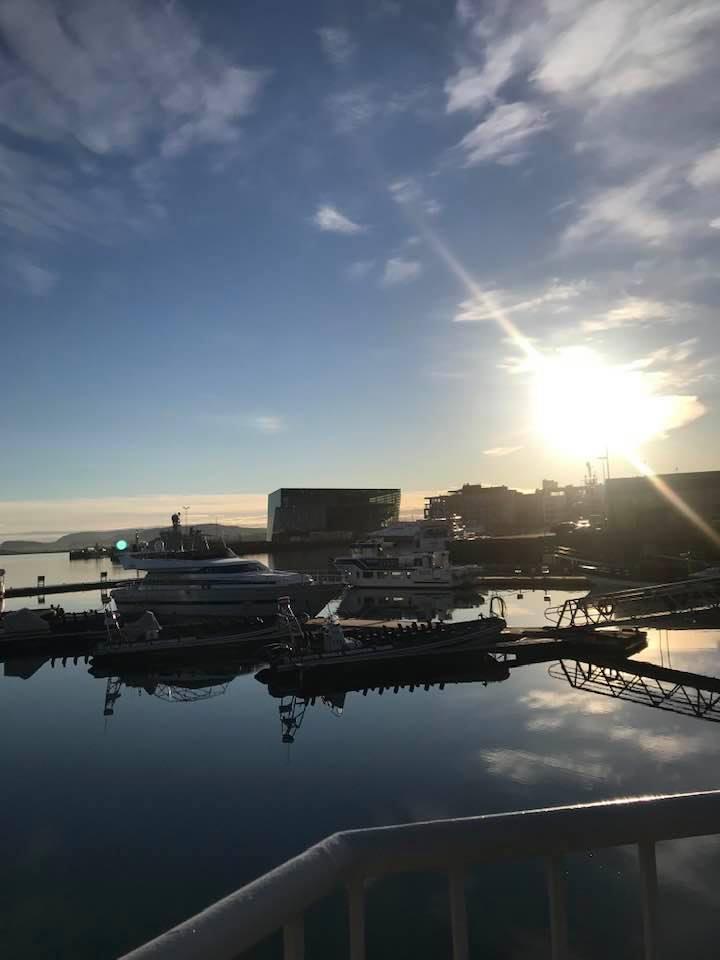 Today we will be operating on Þruma RIB for our 10:00 and 14:00 Premium Whale tours and on our lovely vessel Eldey for the 09:00 and 13:00 Classic Whale Watching tours. Make sure to dress appropriately for the tours as it is always colder on sea than on land.

Report from Eldey: It was the perfect day to do whale watching. We sailed out and came across 2 pods of harbour porpoises, 5 individuals each. We continued our tour when we crossed the the path of a minke whale! It had a smooth sailing all the way. A big flock of birds were feeding at the distance, and as we were approaching we could check out there were more minke whales in the area, 3 individuals! There was suddenly one animal surfacing and it went down for a deep dive. It was a very fast sighting but it looked like a humpback whale. Our next encounter was with two more minke whales that were swimming together, and while we were enjoying its presence some jumps of white-beaked dolphins could be seen at the distance, probably a group of 5-7 animals. To our surprise, near of the two minke whales a big body was surfacing and lifted its fluke, it was the HUMPBACK WHALE! We waited for it to appear on scene again and it did! At first it was only surfacing 3 times before going down for 8 minutes dives, but eventually it stayed a big longer on the surface, but soon it showed us a beautiful tail when diving again. Seeing this beautiful creatures always puts a smile on everyone's face. It was great to see 4/4 of our regular species and with an amazing weather with sun shining in the sky it was a fantastic tour!

Report from RIB: What started out as an amazing day, only got better and better. Faxaflói welcomed us with calm waters and sunshine, and we soon encountered a group of 4 white-beaked dolphins that came close to our boat. Although we didn´t want to leave the playful dolphins, we got news from our other RIB boat that they had seen humpback whales further out in the bay. Along the way, we saw more dolphins but the true stars of the show were the two humpback whales. They were logging at the surface, allowing us to see the top half of their impressive bodies and heads. After a while, they became more playful; swimming underneath the boats, slapping their pectoral fins, and surfacing at around an arms-reach of our passengers! They seemed to be curious about our boats because they were spy-hopping and turning on the side to be able to see us better. The humpback whales stayed with us for around an hour, until they both arched their backs and showed us their flukes, almost as if waving goodbye. As we started heading back to Reykjavik, we saw two more white-beaked dolphins.

Report from RIB: After this morning’s trip, we were hopeful to see some more wildlife in the bay. It didn’t take long before we saw a humpback whale that was feeding. We could clearly see the fluke prints on the water, and the whale even showed us its tail fluke. After a while, we decided to look for other animals in the bay and it didn’t take long until we saw two white-beaked dolphins. We did not want to disturb the elusive dolphins too much so we tried to scan other areas. We caught a glimpse of a minke whale, encountered some more elusive dolphins, and saw another minke whale surfacing briefly, but all the animals were busy feeding so we did not linger too long around them. Towards the end of the tour, we encountered a juvenile minke whale that surfaced around us a few times. A white-beaked dolphin surfaced next to our boat in the same area as the minke whale. On our way back to Reykjavík, we also saw six or seven harbour porpoises and thereby completed our checklist of the four main cetaceans in Faxaflói.

In the meantime, not faraway on the bay, on our other RIB boat, we found a minke whale surfacing close to the boat. Knowing the elusive personality of many of those whales we decided to continue and found a humpback whale that did two quick dives with only a few minutes of interval, with a nice fluke dive on both occasions. We went back to Reykjavik seeing in the distance another couple of dolphins and another minke whale.

Report from Eldey: An afternoon that felt like summer, beautiful with sunshine all the way, sailing in Icelandic waters that this afternoon were quite calm and with very good visibility. On the way out into the bay, we encountered two elusive minke whales, that were swimming fast, they just popped up very briefly. After sailing for a while then we saw a massive blow coming up twice. It turned out to be a humpback whale! It was surfacing very slowly and after some time it showed us its fluke before going for a dive. It did that a couple of times so we got a good look at the fluke and we realized it was the same that we have been seeing this week. Moreover, there were 4 white-beaked dolphins who came up near of the humpback and they delighted us enough times to satisfy our curiosity and leave us wanting more, and we started heading back towards Reykjavík, as we were running out of time. On the way back to port we spotted another group of white-beaked dolphins jumping, quite close to the harbour. What an incredible ride!