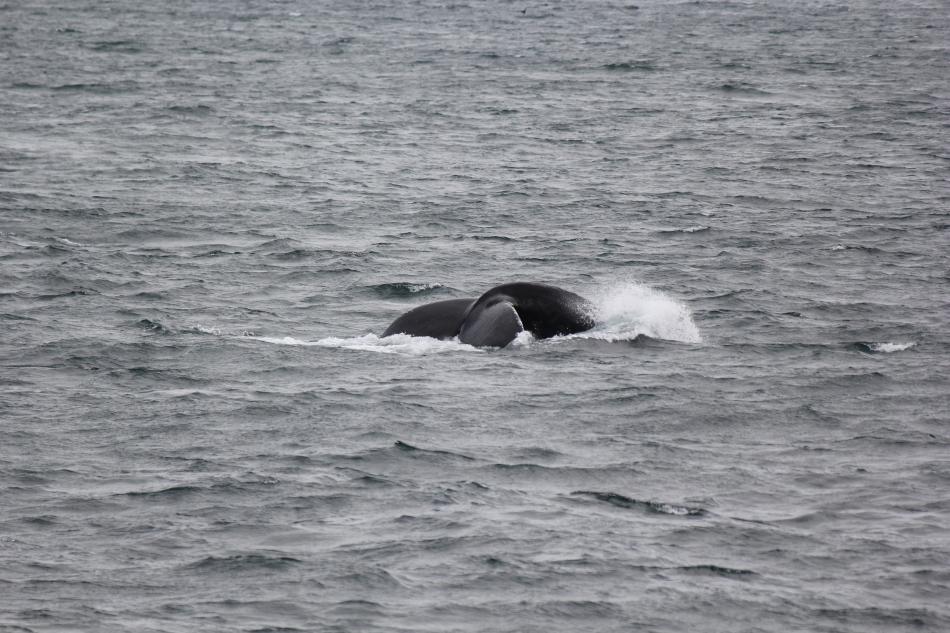 COVID-19: Keep in mind that passengers and crew are asked to ensure their own hygiene and safety at all times. Washing hands thoroughly with soap and using a hand sanitiser is advised.

Report from Eldey: What a beautiful calm sea it was when we set sail this morning. With grey skies and great visibility we were looking forward to what we would find! After about an hour we saw one minke whale in the distance! Minke whales are so fast so often difficult to follow, but this one stuck around a little and then we were joined by two more! At the same moment we happened onto a humpback whale! We stayed in their company for a bit however decided to move on when more boats arrived. We headed back to Reykjavik slowly still seeing the minke whales around us.

Report from Elding: The tour started with very calm seas and almost no wind. We set out of the harbour admiring the beautiful landscape until we came to know of a humpback whale in the distance by another boat. We saw it breach from a distance and as we came closer we saw it blow and dive. We followed this individual for quite some time and in the very end it also provided us with half a breach and a nice fluke dive. We decided that it was time to go and search for something else and sure thing we found ourselves a minke whale. This one was quite shy and did not want to be seen much but its companions made themselves noticable through their stinky breaths. So we saw two other minke whales close to the boat. With these nice experiences and happy memories we sailed back to port.

Report from Eldey: although it was a cloudy day, the sea conditions were great! In fact, the visibility was so great that we could see the beautiful view of the sun hitting the volcano of Snaefellsjökull. We went straight to the area that we saw a few minke whales in the morning, but our first encounter surprisingly was a pod of 5 white-beaked dolphins, which were a bit elusive and that's why we couldn't stay longer with them. However, was amazing to see the group so coordinated in their movements when coming to the surface all together. At the same area, we spotted a minke whale. It was fast, but we could see it multiple times, letting us track this species for a while. In fact, it wasn't the only minke whale we saw. There were at least 3 minke whales in that area. Also, when we were trying to track one of them, we saw a humpback whale not too much further from where we were, showing its fluke before it disappeared again for a deeper dive. It was a very calm day, and although these species were not together,.it was very interesting to see them in the same area, in which we didn't have to travel much to find new individuals.

Report from Elding : Today was one of the flatest sea we have seen in a while, and it felt good to be out again on such comfortable seas. A flat sea helps a lot the comfort of the passengers, but also us as it makes it easy to spot everything we might have around us. After an hour we encountered a humpback whale, and together with it appeared a minke whale. The minke whale surfaced only 2 times and disappeared, but the humpback stayed with us for a while. This beautiful whale individual allowed us to have some close looks on its body length and also on its fluke as it made 1 or 2 fluke dives. After some time with this animal we sailed away and encountered a few more minkes, a pair of minkes allowed us to have some close looks as well. It was impressive to see so many minke whales on the same area. After a good 15 minutes we started to head back to the harbour watching all the sea birds around us.

Report from Eldey: We set sail with a cool Icelandic breeze and calm seas. As we head out we see lots of puffins and flocks of seabirds - an excellent sign for whale watching! Suddenly a minke whale pops up very close to the boat! We see it three more times but just as quickly as it appeared, it disappeared. We continue sailing and find a humpback whale! This individual is quite calm and we even see one further into the distance. We share a few moments but as we see more boats come in we decide to head on. We find another humpback whale and this one is very active, even tail-lobbing! We watch it in awe but sadly run out of time and head back to harbour, this time in the sunshine!

Report from Eldey: Finally with some calm weather again we left port with puffin-obsessed passengers on board. Within minutes of leaving the harbour we had already seen a minke whale and a bunch of puffins flying out to sea to hunt. As minke's are rather elusive, we decided to move on before another minke interrupted us... and another. Suddenly, as we were escaping the horde of minkes, we spotted a blow in the distance. Heading towards it we discovered our first humpback whale of the trip, who was very content to gracefully dive for food in front of us. After a few dives however we decided to leave this individual as we had seen some splashes on the horizon and as we approached a massive tail flung into the air and crashed down again. A second humpback whale was rather violently tail lobbing in front of us, before disappearing beneath the waves. Then, out of nowhere, a breach! After the animal crashed down and we collected our jaws from the floor it began to throw its tail into the air again before getting hungry and switching to a more placid diving behaviour. As we had spent 30 minutes with this individual we decided to leave it alone and see what else we could find, before rather quickly finding another humpback. Unlike the previous 2 this individual was very inquisitive and came right up to our boat, switching sides below us multiple times before getting bored and swimming away. As we were running out of time we began to head back to the harbour but were continuously interrupted by at least 3 minkes. One of which was much less annoyed by our presence and decided to lunge feed right next to the boat, showing us another feeding behaviour as well as its baleen plates, its pleated throat grooves, and the beautifully distinguishable white circle on its fin. As the wind picked up we sadly arrived at port, but our sd cards were full of 3 humpback whales, 6 minke whales, and for our 3 puffin loving friends, countless puffins that were flying, diving and waving their little wings all around us.