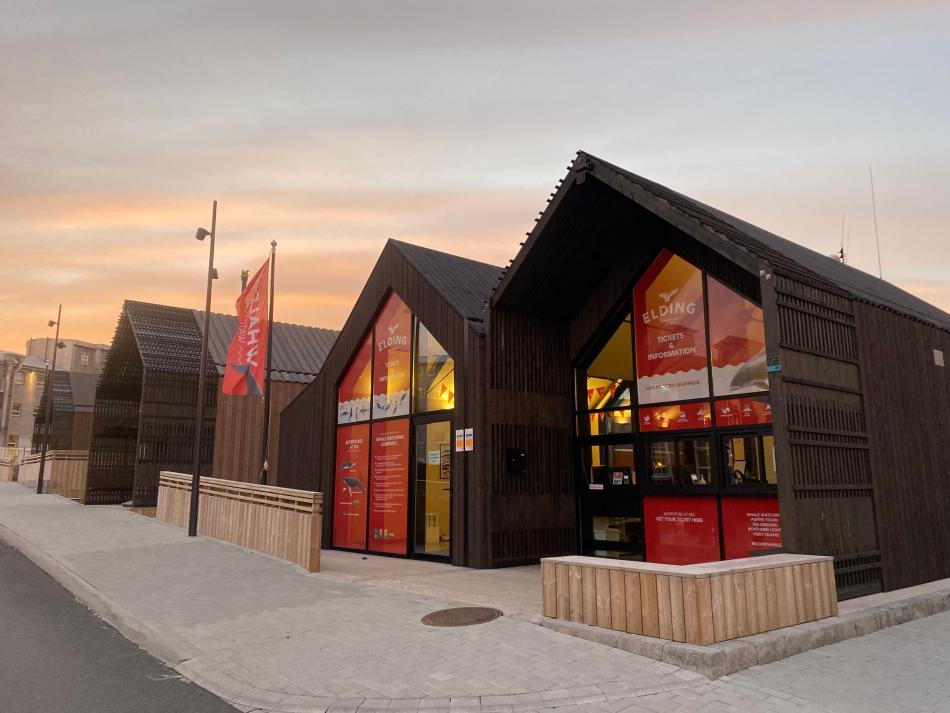 Report from RIBs: The last RIB tour of the season was one we will not easily forget. We had to search for a little while, but this afternoon´s encounters were worth the wait. One of the RIBs was able to stay with one feeding humpback whale for quite some time and got to admire the famous tail a lot because the individual was fluke diving frequently. The other RIB followed a  double blow made far away by two humpback whales. We went there but could not see those whales anymore so we continued our search. The RIBs then joined in an area were there were at least three humpback whales. Two of them were surfacing right next to each other and also next to our boats. The third whale was a bit further from the pair, so we had the opportunity to see this individual when we started making our way back to Reykjavík. Time was actually running out, but the whale was so close to us that we could not drive the boat too fast. We didn´t mind getting 'road blocked' by a whale, but once there was enough distance between us, we had to go full speed back home to get back on time. As it was the last tour of the year, the captain ended with a high-speed city-tour from the perspective of the water: a spectacular goodbye to a fantastic tour and an amazing season.

Report from Eldey: We started the morning with a positive spirit, as we know that tonight it might be a spectacular night with the northern lights, so it could be a round day if we had a spectacular day too. And so it has been by now! The day started beautiful, with a calm sea, warm and windless. We saw the sunrise with pinkish hues that left the Esja Mountains covered in snow that looked like sugar on a cake. We spotted dolphins very fast. They were white-beaked dolphins, it seemed that there was a dispersed group of about 30 individuals. They were all around the boat. They jumped and swam curiously towards us. After spending a long time enjoying their presence, we continued our expedition. Suddenly, in the distance a huge blow was seen. It was a giant humpback whale. We saw it swimming and even swimming sideways, it seemed that it was trying to observe us. As we got closer we realized that it was not one, but two of them. They approached us curious and calm, and that was when we discovered that there were not two, but THREE HUMPBACK WHALES!! This is something incredibly special. Plus, in the distance we could see 2 more humpback whales, but they were far away. Back while we were returning back to the port two more humpback whales together could also be seen, as well as more white-beaked dolphins (5-7 individuals). The bay today overrun by cetaceans. Extraordinary beautiful day!

Report from the RIBs : Words cannot describe how incredible today´s tour was; the sun was shining brightly, the wind wasn´t too strong, and the animals were spectacular. One boat went in the north meanwhile the other went for the south. In the north part we stopped in an area filled with white-beaked dolphins, probably 30-50. A few ones came very close, probably juvenile. Then both boats joined near three humpback whales that were surfacing calmly. Seeing the three whales so close together was very special, and the encounter just kept getting better as the whales moved closer and closer to our boat. While we tried to keep a distance to respect the whales´ space, the whales did not do the same to us: they surfaced first at 15 meter distance, then at 10 meter, and, before we knew it, they were about 3 meter away from one of the RIBs! It was spectacular to see in such close detail how breathtakingly beautiful and impressive these humpback whales are. We stayed with the whales a little while, and they started rolling and lifting their pectoral fins out of the water. We then decided to check out another area, where one boat found two groups of around 4 or 5 white-beaked dolphins that came very close too. We also caught a glimpse of a harbour porpoise, so we saw a total of three species today! The other boat crossed the path of 3 other humpback whales that we could spot from the distance. We approached them and briefly admired those animals before we went back to Reykjavik after a quick city sighting.

Report from Eldey: To continue the magical day we had a spectacular afternoon. The tour started with exceptionally good visibility and beautiful views. Shortly after leaving port a group of 7-8 white-beaked dolphins appeared on the scene. They jumped and swam fast from one side to the other, it was lunchtime, so they would surely be eating. After seeing them repeatedly, we decided to continue on our way and an elegant minke whale surfaced in front of us. It was swimming quite slowly and we could even listen how it was breathing. Shortly after, some huge blows could be seen at the distance. As we approached to investigate their origin, a family of adorable and chubby harbor porpoises crossed our path, about 5 in total. How spectacular it was to see them just as a humpback whale emerged to the surface! The mystery of the blows was solved and our tourists admired such a great creature. What we did not know is that the mystery was going to be bigger than expected, since it was not one individual, but two! And not far away was a third individual. When we were returning back home two more other humpbacks appeared, and were able to photograph them with the snow-capped volcanoes of the Snaeflessness peninsula on the back. It was a very special birthday gift for some of our guests.