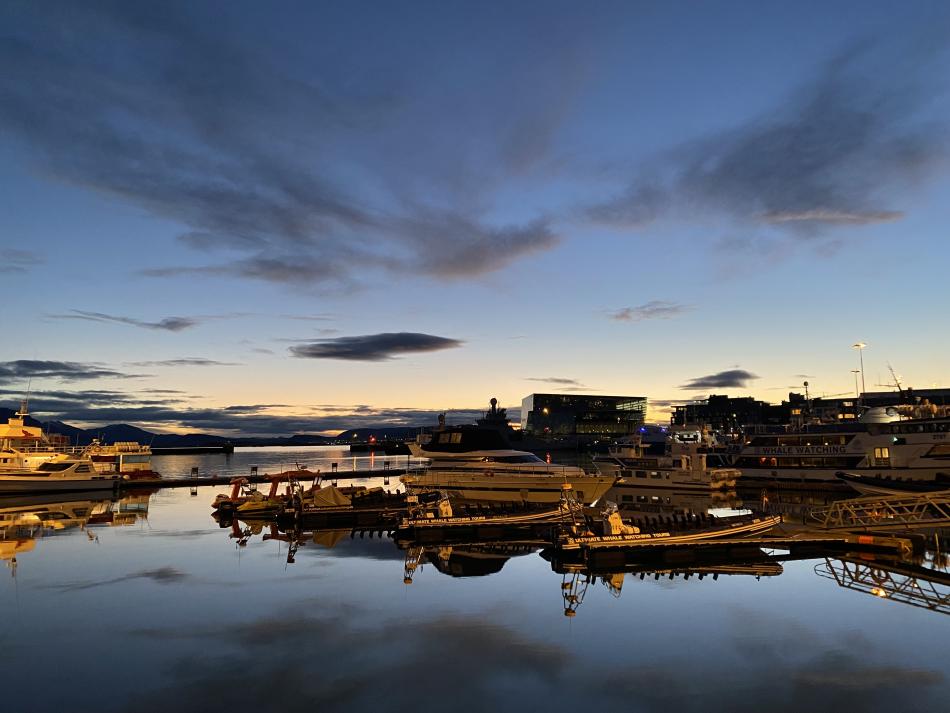 Today we will be operating on our lovely vessel Eldey for the 09:00 and 13:00 Classic Whale Watching tours. Make sure to dress appropriately for the tours as it is always colder on sea than on land.

The seas may be rough, so as always, we have sea sickness tablets available free of charge at our ticket office.

Report from Eldey: What a beautiful day to head out into Faxaflói with a stunning sunrise to lighten up our morning. It was very cold with 5-7m/s winds from the NE and about 1m swell. We headed to the area humpbacks were seen from yesterdays afternoon tour and we were so happy to see they were still there. We actually saw 5 humpbacks in total, a trio and two solitary individuals. We also got a glimpse of a minke whale too which great. Not only were accompanied by whales but the birdlife was also abundance; eider ducks, sooty shearwaters, seagulls. We even had a kittiwake that was super curious of us and flying only a meter or two above our heads. We sailed home with a hot chocolate and a smile. A great morning.

Report from Eldey: The afternoon appeared with the snow-capped mountains and the clouds had an extraordinarily special bluish color that drew a spectacular landscape. The sea was calmer than the morning. Not long after leaving the harbour we had our first sighting, a minke whale! The animal surfaced coming towards us, we thought it was going to follow the same direction but it seemed that it was investigating us. In fact, several times that we decided to continue the tour, the whale followed us. When we thought that it was no longer interested in us we left and again it reappeared behind the boat towards us. What do these animals have in mind? Another minke whale appeared in the vicinity, but our curiosity was not only in these whales as in the distance we just saw a giant splash. It appeared as a bolt on the blue! Possibly an animal breaching? When we got closer to discover what secret it was keeping, we were able to find out that it was a humpback whale. It was difficult to understand its behavior. It did very long apneas, and spent almost no time on the surface. It might be probably sleeping. But luckily we were able to see it well. As there were several boats around, we decided to continue our expedition in search of more animals. Shortly after, another humpback whale appeared on our way. This time this individual came to the surface closer to the boat and we were able to enjoy its presence. Our guests were even surprised to see its giant tail very close to the ship, exclamations of amazement could be heard throughout the ship. After that very special sighting we began to return back home, and along the way we were delighted by the presence of two more humpback whales, which with the Esja mountains in the background left a spectacular afternoon to remember.