When you think of Iceland's birds, the Atlantic Puffin is likely to be the first one that comes to mind. Their iconic look of a black and white body complimented with a colourful orange beak has even given them the nickname 'the clown of the sea'!

Here are 10 facts you may not have known about the Atlantic Puffin:

Smallest of the puffins

There are a total of three species of puffins in the world: Tufted Puffins, Horned Puffins and Atlantic Puffins. They are all a part of the Auk family of seabirds that also include Razorbills and Guillemots. Interestingly, the Atlantic Puffin's Latin name, (Fratercula Arctica) translates to “little brother of the north”. They are indeed the smallest of the three species, weighing only about the same as a can of coke!

Good at swimming and flying

Puffin's short wings are perfectly adapted for swimming, where they have frequently been described as flying under water while fetching food. They are avid flyers and can beat their wings up to 400 times per minute! They're not very good at landing however..

Studies show that a puffin's beak will glow under blacklight. Supposedly, they possess the ability to see wavelengths at the UV end of the spectrum which may help them attract the opposite sex!

Like many penguins, puffins will mate for life and will meet up with their partner at the same spot every year to breed. If their partner fails to show up on time, they will move on to find a different partner, but will get back together if their old partner returns. They are not sexually mature until they are about 5 years old, so until then they are mainly learning all about the puffin life!

Prefer to live on islands or cliffs

It is not an easy life, being a puffin. They are vulnerable due to their size, which is why they prefer to live on islands or cliffs far away from predators. Iceland is home to more than half of the world's Atlantic Puffin population where hundreds of thousands of pairs gather each summer to breed.

Rather than making nests like most other birds, puffins will actually dig holes in the ground / between rocks with their feet and beaks. This ist to prevent predators from gaining access to their young ones. Puffins actually only lay one egg per breeding season, so this is a vital defense tactic to keep the species going!

Can carry multiple fish at a time

Puffins usually carry about 10+ fish in their beak when hunting (while the British record is 60+!). Their spiney tongues and the grooves in their beaks makes it easy to hold a number of fish in place at the same time. Their diet mainly consists of sandeel, capelin and herring and the puffin parents will take turns to feed their little puffling (up to 100 times in a day if needed).

Puffins generally live a long healthy life and can easily reach the age of 20, while the oldest puffin in the world is believed to have been over 35 years old!

Once breeding season is over, puffins will start flying off one by one, back to sea where they spend the majority of the year. Not much research has been done on their winterdwelling, but it is known that their winter plumage and beak is so different that they look almost unrecognisable.

Learn more about puffins and other birds: 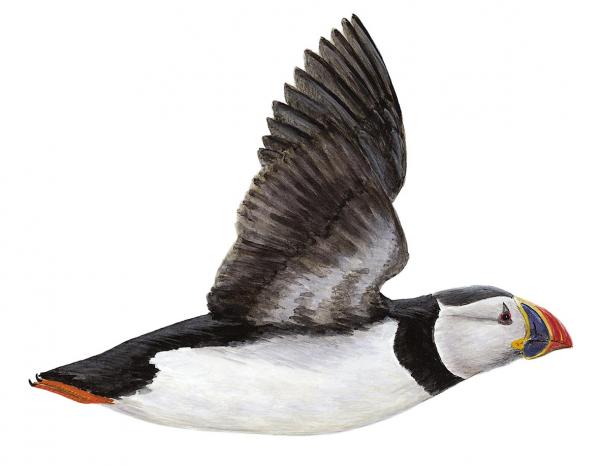 Puffins are part of the Auk family of seabirds that also include razorbills and guillemots. They can fly, swim, and dig burrows and are one of three species of puffin in the world. Over half the world’s population of Puffins comes to Iceland to breed. Iceland also has the largest Atlantic Puffin colony in the world. The Westmann Islands in the south has about 700,000 nesting pairs. 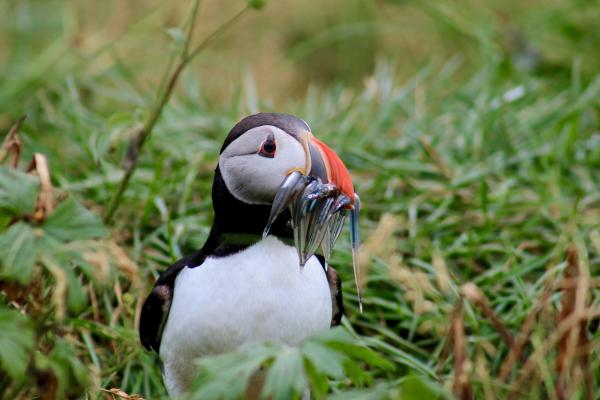 Clown of the Sea | The Atlantic Puffin

Puffins are part of the Auk family of seabirds that also include razorbills and guillemots. They are quite small in size; only 30 cm. in length, weighing 400 gr. with a wingspan of 55 cm. They feed on sandeels, capelin and herring but seem to be decreasing in numbers over the last few years due to the lack of food in the bay caused by increasing water temperatures. They are consi 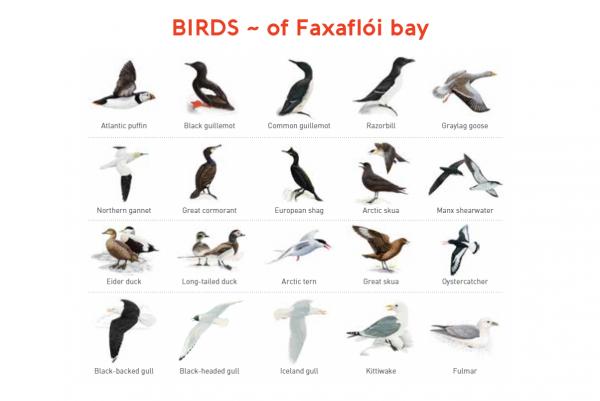 Seabirds are an important part of every whale watching tour and they often guide us to the whales. During the summer months the puffins make a spectacle of themselves as well as the gannets, fulmars, guillemots, skuas, arctic terns and many more. The winter birdlife is not so diverse but it is nice to see certain species in areas that you wouldn't normally see.

Our most popular puffin tours:

This is the most convenient way to see the Atlantic Puffin from Reykjavík! We will take you to one of three islands just outside the city, where these charming birds are known to nest.

Leaving from the Old Harbour in Reykjavík, this is the ultimate puffin adventure tour. We arrive before other operators so we can enjoy an uninterrupted visit to the puffins and seabirds of the Faxaflói Bay.