The Wonders of Eyjafjörður fjord 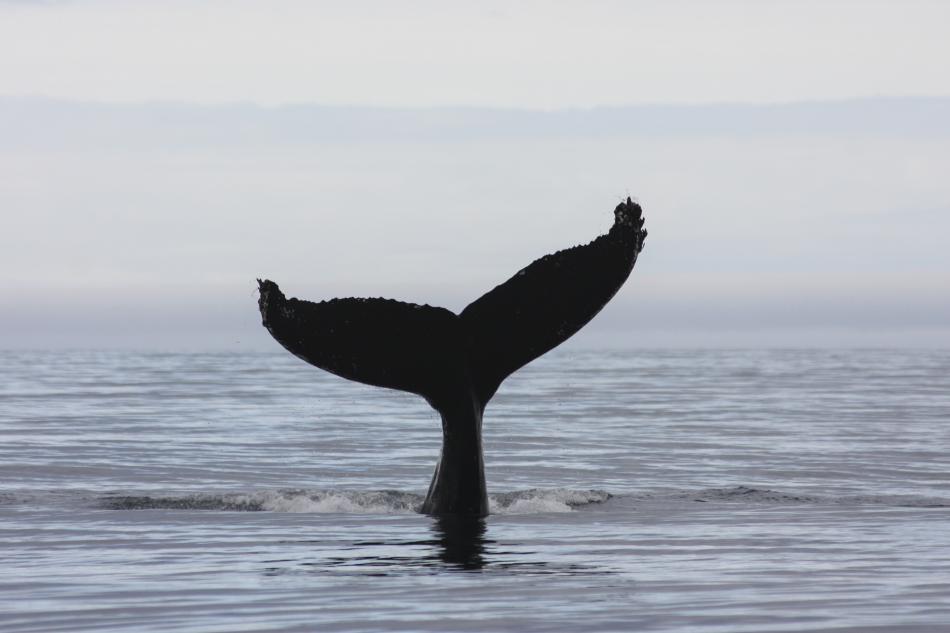 Eyjafjörður and the surrounding waters host rich marine life where hidden gems lurk in the deep. In these waters you can find the largest animals on earth and those that grow to be the oldest. The largest one is the majestic blue whale, a 30 m and more than 100 tonne giant (left figure), which visits the north coast of Iceland every summer to feed on zooplankton. The oldest living animals on earth is an Icelandic inhabitant which also lives in Eyjafjörður and can get as old as 400 years, this is the ocean quahog (Arctica islandica). This interesting animal is a clam and actually important as an exploitable marine stock (right figure).

Another remarkable phenomena found in Eyjarfjörður are three hydrothermal vent sites with numerous chimneys found at an unusually shallow depth, or only 65 m. Evidently, nowhere else in the world have these geographical wonders been found in such shallow waters and can thus be reached by divers, but they are usually found below 500 m.

The diverse life of the fjord

The two different water masses that meet off the northern coast of Iceland, i.e. the cold Arctic water and the warm temperate Irminger current from the south, influence the species composition in Eyjafjörður and the surrounding waters. Both temperate species and Arctic species can be found there. The most abundant fish species in Eyjafjörður are those that prefer to live at the boarders of the cold and warm zones. These are the most common species in Eyjafjörður, such as the cod, haddock, saithe, herring and lumpsucker which all are important exploited species in Iceland. The fiords at the north are important nurseries for juveniles of these important fish species.

What lurks at the bottom?

The bottom of Eyjafjörður provides various habitats at different depths and conditions. Whether these are vast mudflats or hot water spewing chimneys, life thrives in every place. Hidden underneath or crawling on top of the muddy planes are numerous animals and a diversity of species. These animals are called benthic animals and live at the bottom either partly or throughout their lives. Benthic animals mainly feed off kelp, sediments and other animals, some are important scavengers, feeding off rotting animals and plants which fall down from the upper layers, and some live as parasites. The benthic fauna in Eyjafjörður constitutes of e.g. starfishes, sea urchins, sea stars, clams, whelks and other snail species, sponges, different worms such as flatworms and polychaetes worms and various small crustaceans along with lurking, predatory flat fishes and even the ferocious but slow moving Greenland shark.

What swims about in the water column?

Seasonal bloom of phytoplankton during spring and again during fall brings the upper layers of the ocean around Iceland to life by attracting variety of pelagic animals (animals swimming above the bottom). From the small microscopic zooplankton to the enormous baleen whales. The phytoplankton sustains life in the upper layers of the ocean by producing organic material (sugars) aided by the sun’s energy and nutrients in the water. During winter, essential nutrients such as phosphor, nitrogen and iron accumulate in the upper layers of the ocean since there is very little of photosynthesising algae to use them up during the darkest months. Therefore, in spring, there is a plenitude of nutrients for the phytoplankton to use in the upper layers as the sun starts rising in the sky. As the phytoplankton blooming increases the zooplankton arrives with microscopic organisms such as copepods and krill (both crustaceans) to multiply like never before. Schools of zooplankton, which in addition to tiny crustaceans are also comprised of fish larvae, worms, jelly fish and other microscopic animals, graze on the phytoplankton. Larger animals, such as small schooling fish (e.g. herring and capelin), subsequently feed on the zooplankton and are themselves prey items for larger fish, whales, seals and birds.

The marine mammals of Eyjafjörður and the surrounding waters

A number of different whale species are seen off the north coast during summer, particularly in Eyjafjörður and the neighbouring Skjálfandi Bay. These whales visit the bays and fiords at the north to feed mainly on krill, sand eels, but also small cod fishes (e.g. Atlantic cod, haddock, saithe) and possibly pelagic schooling fish such as herring, capelin and mackerel. These whales are predominantly the blue whales, which is most commonly seen in these waters during spring and early summer (May-June), the humpback whale which can actually be seen there more or less throughout the year, minke whales, white-beaked dolphins, harbour porpoises, killer whales, and some less common, off-shore species, such as fin whales, sei whales, sperm whales and bottlenose whales.

Bit by bit we learn some new and interesting things about whales, and usually they manage to surprise us with every new finding. One of those recent and surprising findings involved the singing enthusiasm of male humpback whales during their mating season in Icelandic waters.

The enchanting and yet out-of-this-world songs of the male humpback whales are broadcasted by males in heat during their mating season which takes place each winter. The humpback whales, both males and females, take on a long journey every year from their high latitude feeding grounds and down to their tropical breeding grounds. That is where pregnant females give birth and males fight over receptive females.

The songs play an important role in the whole mating scene, though not particularly to impress females but rather to synchronize and orientate males on the breeding ground. Remarkably, the males sing day and night for months at a time while the mating season lasts and once it is over, they turn quite silent, though not entirely, for the rest of the year where time is more or less spent on feeding.

BOOK YOUR TOUR FROM AKUREYRI

Here is your chance to see the incredible whales and dolphins of Iceland in their natural habitat. The vast fjord's vibrant life and plenitude of food bring the larger-than-life Humpback whales that call Akureyri their home.

A 2 hour whale & bird watching tour from downtown of Akureyri. Experience and get close to the incredible humpback whales of the Eyjafjord, starting from the capital of North Iceland.